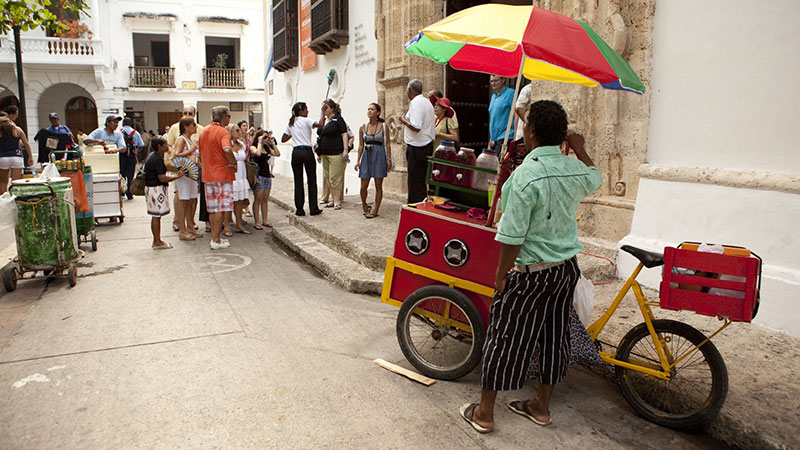 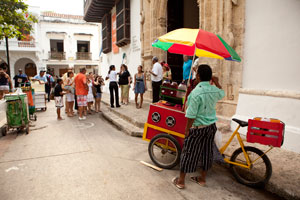 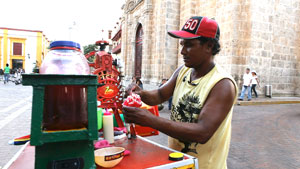 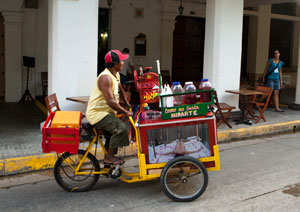 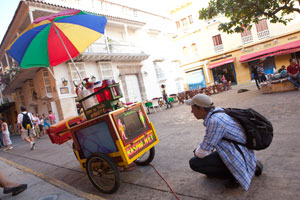 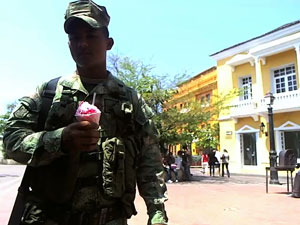 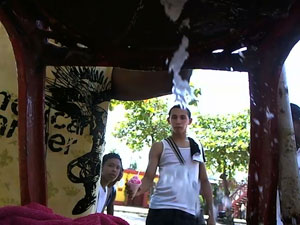 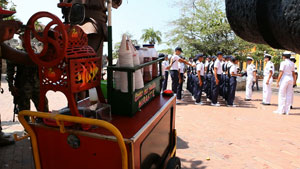 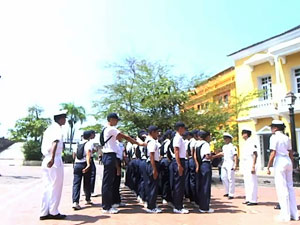 Raspao (Snow cone) is a man-operated vehicle with a built-in system for video capturing that records live action clips, every time the “raspadero” (raspao seller) makes an ice cone. The handle of the ice-shaving machine triggers two cameras randomly one at a time. One camera shows a close-up of the exchange between customer and seller. The other gives a view of its surroundings and the road. Real time video is shown on one of the screens simultaneously while it is recording. Thereafter, these video recordings are automatically uploaded to the web site (www.raspao.net).The cart has two buttons that trigger functionality when the cart is not recording. The first one shows the documentation of the cart being constructed collaboratively between residents in The Bosque, a working class neighborhood in Cartagena. The second one shows previous recordings of people interacting with the piece.

On one side of the cart, a plasma TV shows documentation of a private performance I shot and made in Toronto, Canada. The performance deals with childhood memories. I paint on the snow using fuchsia syrup (reminiscences of Ice Cone or “Raspaos” and the arabesques floor tiles in her house in Cartagena. At the end, I lay down naked on the snow trying to impossibly recuperate my childhood memories growing up in Cartagena, Colombia, when I would buy and eat an ice cone laying down on the beautiful and cold tiled floor of my house, during heat waves.

2. Video Intervention showing on a 42″ TV plasma mounted on the side of the vehicle.

3. Web page: www.raspao.net This site accommodates a documentation of the vehicle’s travels. As the cart travels from city to city, a new page is created on the website with their respective video recordings

4. Stickers of a silhouette of Gelis, resembling Michael Snow’s Walking Woman, This stickers are pasted on the ice cones and also they are pasted on different places around the city.

A Source of employment

The Raspao also serves as employment for the operator of the machine who receives a salary and gains profits from the sale of ice cones. It’s important that the operator of the cart is knowledgeable about the sales of ice cones, as well as has the ability to be friendly and open to conversing with his/her customers. Once a person is hired for the job, s/he is trained to operate the cart, and to make the ice cones. Additionally, s/he also learns the technical aspects of the cart including basic information about the software and hardware that is being used. S/he will also be trained on the basics of photography and video. I will also converse with the cart operator to discuss the conceptual aspects of this work. Consequently, the operated/seller will know how to operate the cart technically as well as conceptually.

Place of meeting and conversation

Traditionally, these carts have served as a point of meeting and reunion. Utilizing technical mediums such as a video camera, a microphone and electronic components, which facilitate listening and visualization, the cart’s purpose of generating conversation is reinforced. Since the video is reproduced in real time as it is being recorded, this piece functions as a mirror or creative space for the audience/customers to create their own narratives by interacting with the cameras. Thanks to the online component (raspao.net) this piece opens up the possibility for the public to revisit their narratives as well as to relate their stories to other ones on the site from their homes through the web.

The ice cone seller is transformed into a cameraman/ cinematographer that captures the machine’s interaction with the public/actor around the cart. He/she selects what he is going to record during his travels on the streets. He/she also plays the role of director creating scenes and diverse exchanges between people while they converse, asking questions about the machine and camera or about the concept behind the piece.

Raspao is also a piece that has a strong documentary base, which produces and archives audiovisual material. The building of Raspao has been documented from the moment that it was constructed. These videos reveal the transformation of the vehicle, the neighborhoods where it was made, as well as the people that collaborated in its construction. These videos have been transformed into a short documentary about the neighborhood. These videos can be accessed and triggered by pressing a button on the cart or through the web page. This material takes the viewer back to the cart’s humble origins, specialized work, and the conceptual collaboration under the direction of Luchine, the ice cone seller; Gabriel, the welder; Guillermo, the cart painter; and Luis, the electrician.

Through his journey, the cart maps out the flow as well as the urban behaviors of the places where it travels to register and capture it.