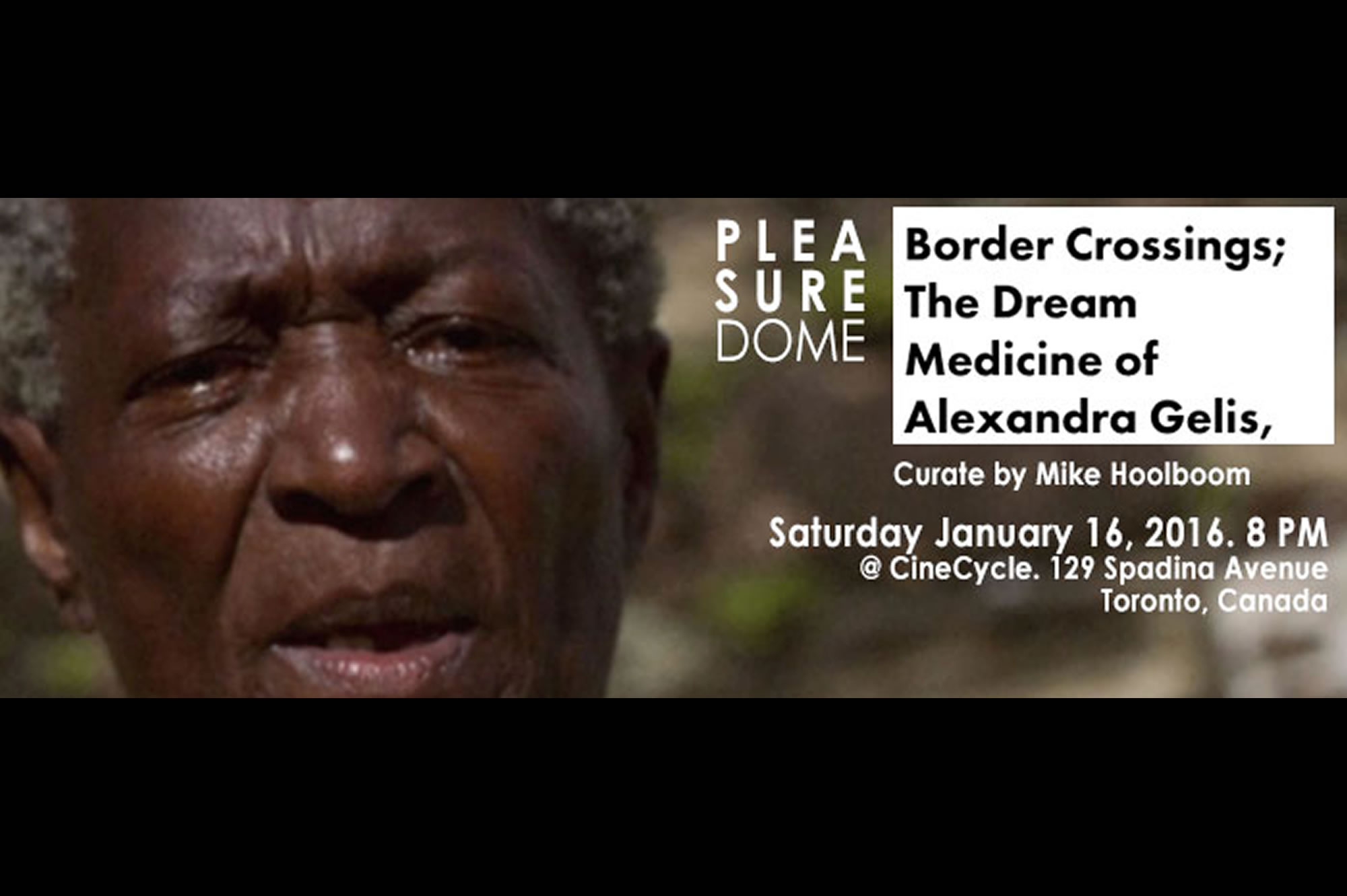 Alexandra Gelis is a Colombian-Venezuelan artist concerned with borders and boundaries – of gender, of citizenship, of economic status. Her work is a song of the underclass; she brings forgotten faces and pleasures to the screen with bold digital poetry and direct cinema re-workings, offering new ways to show what has been for so long ignored or forbidden. This program offers a selection of never seen before work — fresh winds from the south offering us a chance to encounter seven years of this prolific artist’s work.

English for Beginners 2:32 minutes 2009 video
The beginning, the first border crossing, the first video made after the artist’s move to Canada. Language, country, identity. It is composed in three frames, an echo of the Canadian flag. The speaking face is also divided, cut in half by the landscape that pours into the new wound of identity.

Rhizomatic Directed Simulation 6 minutes 2014 Super 8
The movie opens with a quote from Borges: “The best imitation consists of the original’s destruction and the creation of a self referential text.” While a galaxy of Super 8 luxuries erupt, the film hand processed, the emulsion cracked in order to reveal its silver secrets, a silhouetted camera operator attempts to contain the experience, even as he is subjected to the same chemical disintegrations.

…the materialization of the political … increasing the level of testosterone… different than a cis-female.” The quotes are drawn from Paul Preciado’s devastating theory confessional Testo Junkie: Sex, Drugs and Biopolitics in the Pharmacopornographic Era.

Bridge of the Americas 2:30 minutes 2015 video
Part of an ongoing series of works made in Panama. Live animations re-animate this international bridge and border. The persistent background of life in the Panama Canal Zone are these passing ships crammed with waving travellers, the most temporary of citizens, their eyes like rain.

Conchitas/ Conchs (with Jorge Lozano) 5:50 minutes 2010 video
Double screen movie about composition, memory and drowning. Like so many of this artist’s movies, these pictures are gathered as part of her living, collected with her reliable camera accompaniment. Alexandra becomes the beach sand while Jorge dissolves the picture into a gummy bear colour screen, as we hear memories of drowning on the soundtrack, the casual terror lurking in the light of the everyday.

Maria’s House/ La Casa de Maria 12 minutes 2009 video
Begun with a series of vertical photo tilts of Maria’s house, an animated scanning (let’s not leave anything out!), this house movie contains the entire history of Panama as we watch it slowly empty out. The walls just outside the front door kept the whites safe from roving pirates, and while Maria and her family cleaned their houses and cooked their meals, even helped build the Panama Canal, their colour and class ensured they would live outside protections. Maria’s hard working social conscience helped her become elected, and as she brings us out into the streets she is greeted by neighbours, their warmth a testament to a lifetime of activism and care.

San Rafael 4:20 minutes 2010 video
Made in a single shot from a chance laundromat encounter. The black eye of desire. Rafael offers a reaction shot to his street cruising efforts, and the unwanted fight that ensued. In his extravagant speaking he names himself as an archangel, his chest open so that the wings of his words can lift every ordinary encounter into a queer sublime.

Borders/ Bordes 3 minutes 2010 video
A masterpiece of multi-screen bodily decomposition,Borders offers a nine-screen collective portrait, made entirely out of photographs. Inviting six of her queer feminist housemates who identified as women for a suite of portrait sessions, the artist pictures the borders of skin, and by recombining them into a grid creates an always shifting composite body that floats between genders. The soundtrack is created out of the spaces between words, the beginnings of sentences, the pauses and hesitations, where the unconscious lives.

One Dollar Click 2 minutes 2009 video
The artist makes an approach to the indigenous triumph of the Kuna on the San Blas Islands, a string of 365 islands that run between Colombia and Panama. Nearly every frame has come from a still camera, as we are led across sand and water into village life. The artist appears as an animated apparition, portraits, posters and landscapes float through her. The feeling of the land, the roots of collective experience and identity. A passing banner announces: “People who lose their tradition, lose their place.”

La Casa de Olga/The House of Olga 6:18 minutes 2010 video
In the most direct frames possible the movie brings us into an intimate encounter with Olga, elegant and proud, thoughtfully articulate. How happy she is that Alexandra has come at last to see her house, which she shows off with all the grace of an estate holder. She points to the rock which was her bed for many years, and which cured her of every physical ailment. Her home used to be part of the old monastery in Panama City called Ruins of the Society of Jesus, but the walls and ceilings were blown away, she lives now in the former interior, exposed to every element, taking shelter occasionally beneath her yellow umbrella, her scant belongings placed in the cracks of a wall.

Alexandra Gelis is a Colombian-Venezuelan, media artist based in Toronto with a background in visual arts. She is a PhD candidate in Environmental Studies at York University, she also holds an MFA degree from the same university, Toronto, Canada. Her work predominantly involves photography, video, electronic and digital processes. Gelis’ work addresses the use of image in relation to displacement, landscape and politics beyond borders or culturally specific subjects. In her latest works she has expanded her practice using electronics and programming for interactivity. In her installation work she creates immersive sculptural spaces, using video projections and complex sound designs. She also works as an educator/facilitator, leading video and photography workshops aimed at youth in marginalized communities in Canada, Colombia and Panama. Because she works as a workshop facilitator in several countries, in many cases her teaching practices determines the artistic work that she creates. She has been concerned with the role of the artist as multidisciplinary inquirer who engages in multiple explorations of diverse methodologies in fieldwork.

Her work has been shown in several venues in Canada, Venezuela, Colombia, Panama, Argentina and the United States. She has developed curatorial projects and video screenings, and programs for festivals in Latin America and Canada